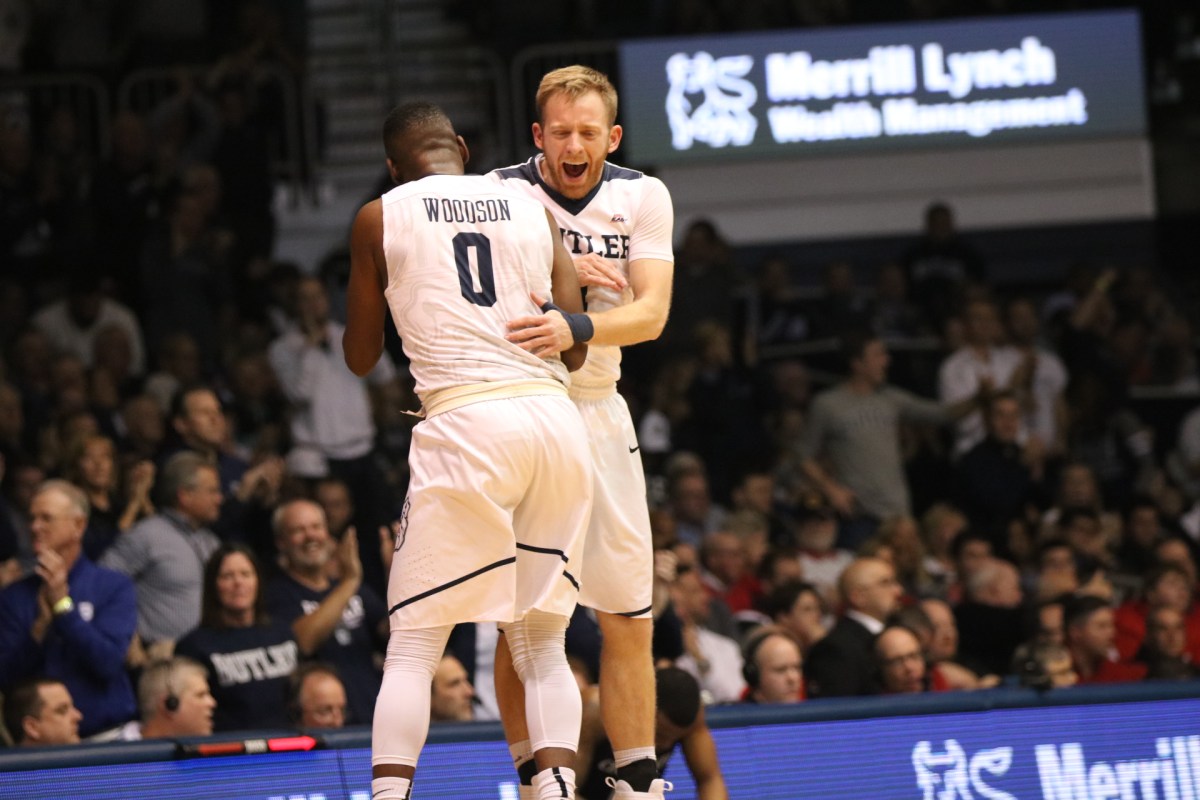 Tyler Lewis and Avery Woodson jump in the air to celebrate in a game earlier this season. Photo by Jimmy Lafakis from The Butler Collegian.

The Butler Bulldogs are ranked No. 22 in the country and own a 21-6, 10-5 Big East record. Their conference record places them in sole possession of second place in the Big East.

While those numbers may please some Butler fans, their focus should be aimed toward making a Final Four run à la 2010 and 2011. A few crucial things must happen for an appearance by Butler in Phoenix.

The obvious answer here is Kelan Martin must return to his ways of dominating games. The Bulldogs are 7-1 this season when Martin scores at least 20 points. In their last five games, they hold a 3-2 record, and he averaged 10.6 points per game during that stretch. To be fair, he only played 10 minutes against Marquette due to head coach Chris Holtmann’s decision to bench him in the first half. Butler will need a few Martin 20-point performances to have success in the Big Dance.

The Bulldogs have encountered struggles in their first halves, especially during Big East play. During their first meetings with Marquette and Xavier, they had to put together nearly flawless second halves to overcome their slow starts. Lately, Avery Woodson has provided Butler with a spark in the first half. His first half points against Marquette, St. John’s and DePaul (all the second time around) were 15, 15 and 12 respectively. The senior transfer does most of his damage from behind the three-point line. One could reasonably argue that teams better than the three listed above will lock down his perimeter shooting in the postseason, but the Bulldogs will need a few big three pointers from him, preferably as a spark in the first half, to help them win a big tournament game.

The last two keys to their postseason success are about the team and not individuals. Butler will need a mix of lockdown perimeter defense and opponents shooting poorly from three-point range to take down higher ranked teams in the tournament. Arizona, Cincinnati, Indiana, Seton Hall, Utah, Vermont and Villanova all shot under 30% from the three point line in their losses to Butler earlier this year. On the other hand, when the Bulldogs have allowed teams like Creighton, Georgetown, Indiana State and Providence to shoot at least 40% from deep, they have been beaten. It is a tough task for Butler guards to fully commit to closing out on a shooter because if they get beat off the dribble, they don’t have help in terms of a reliable shot blocker. But time and time again this year, they have been upset when they allow a team to get comfortable from range.

Lastly, this team must be flexible. Not in terms of stretching but in terms of switching up their tempo and defensive scheme quickly. Butler has shown the ability to grind out games with long offensive possessions with Kethan Savage at the point as well as run the floor with Tyler Lewis at the helm. This is a great asset when March rolls around because opponents’ strategies vary, and you want to be the team that can adapt to whatever tempo is thrown your way.

As far as defensive scheme, it’s simple. Butler isn’t an elite defensive team, so they can’t rely on man to man all the time due to mismatches. This means they must switch to a form of zone, perhaps like the matchup zone they showed against DePaul on Feb. 19 to throw the other team off their offensive rhythm. The key here is that Holtmann must choose his spots wisely to switch to this scheme to get a much-needed defensive stop.

While there is no one perfect formula for success in March, the above factors are just the first steps to Butler having a memorable run in the tournament. They will likely need a few spectacular shots and steals from Kamar Baldwin as well to wind up in Phoenix.