Doug McDermott to Bulls a Win-Win for Both Parties

Doug McDermott is now a member of the Bulls. So who better to analyze than our resident Chicagoan?

Share All sharing options for: Doug McDermott to Bulls a Win-Win for Both Parties

Okay. I may be slightly biased on this one.

But Doug McDermott heading to the Chicago Bulls is one of the best moves of the entire draft.

Now overlook the fact that I've been a die-hard Bulls fan since I was in diapers. Let's be honest: the Bulls zeroed in on their man, who was well out of their draft range, and in the end it could be the catalyst to building a championship contender.

Chicago sent its 16th (via Charlotte) and 19th picks in the 2014 NBA Draft to the Denver Nuggets for the rights to McDermott, the 11th overall pick, and backup forward Anthony Randolph, who is likely trade-bait, although he cannot be packaged in a deal for 60 days, per NBA rules. Denver used those picks to select a European stash player, Bosnian center Jusuf Nurkic, at No. 16 and Michigan State guard Gary Harris at No. 19, and picked up a second-rounder in 2015 in the process.

If you're a Bulls fan and you're unfamiliar with the man known as Dougie McBuckets, here's a scouting report courtesy of DraftExpress.

The Bulls answered a need for scoring by making a move for the fifth all-time leading scorer in college basketball, a player with size that can shoot the lights out. The consensus National player of the year, McDermott averaged 26.7 PPG during his senior season, shooting 52.6 percent and is a career .458 3-point shooter. He scored 1.44 points per possession off screens, 1.31 off catch-and-shoot situations and 1.154 off the dribble. Working in an offense led by Derrick Rose and Joakim Noah, McDermott will be a threat around the perimeter for the Bulls. He makes tough shots at a high percentage, which is a very underrated skill. He has an array of post moves, developing a Nowitzki-like post-up fade over the years. A great finisher at the rim, the Bulls got the best possible player for their current situation.

Chicago scored a league-low 93.7 PPG playing all but 10 games without its star point guard, Derrick Rose. Chicago's inability to score was exploited in the playoffs against the Washington Wizards, when their offense lacked the aggressiveness to attack when struggling. McDermott may not get the call to take the last-second shot, but he'll give them a viable option in those situations.

When I say McDermott can shoot, it's not an understatement. Just check out this shot chart. 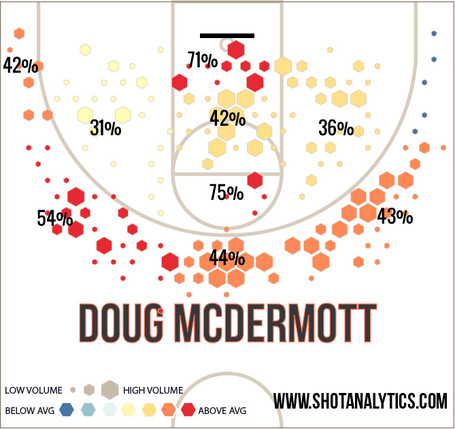 If there was anyone in the draft who was a perfect fit for a team and a coach, it's McDermott to Tom Thibodeau and the Bulls.

Thibs is known for being hesitant to play his rookies. So far in his tenure with the Bulls, we've seen Marquis Teague become an All-Bench first teamer and Tony Snell fail to see significant playoff minutes in a five-game shellacking at the hands of the Washington Wizards. Jimmy Butler's tenacity and defense was able to position himself into the rotation in his second-year.

But this time, Thibodeau might have to find a role for his rookie. For one, McDermott is not inexperienced by a long shot. He's the first Bulls first-rounder to play all four years in college since 2003 (Kirk Hinrich). He's the most polished rookie the Bulls have seen in decades, and he's no stranger to playing under pressure, and that should garner him playing time in Thibs' system. Secondly, McDermott was brought in for a reason: to shoot. The Bulls have two long-range threats on their roster currently: Kirk Hinrich, an unrestriced free agent, and Mike Dunleavy, whose cap-friendly contract will more than likely be moved to create cap space for a big-named free agent push. McDermott will have to be called upon in situations where the Bulls need a jolt of offense outside of Derrick Rose and another scorer.

Of course, Chicago's best team skill is McDermott's biggest detriment: defense. He's is a 6-foot-8 wing with a 6-foot-9 wingspan. He may have been able to stop players in college, but to superstars like LeBron James and Paul George, a player of McDermott's size is meat on the table.

But if there is anyone who can fine-tune McDermott's defensive game, it's Tom Thibodeau. The Bulls allowed an NBA-low 91.8 PPG last season, and ranked second in defensive efficiency behind Indiana. Thibs believes McDermott is very capable of playing D. Nobody is better at teaching defensive schemes than Thibodeau, and with McDermott's high basketball IQ, there's no reason why he can't excel defensively in the NBA.

Bulls fans might find it easy to compare Dougie to another former Bull from Creighton: Kyle Korver. Both guys have a reputation for being outside shooters, albeit liabilities on defense. Korver was able to flourish in his two seasons as a Bull thanks to his ability to knock down the clutch 3-pointer and his teammates being able to mask his defensive woes. But McDermott is better than Korver. Although he isn't athletic, he's far more skilled with the basketball than his fellow Bluejay alum. He's more like a better Wally Szczerbiak - a marksman who can put the ball on the floor and attack the basket, but can also hit the contested jumper. Like Korver, Stacey King has already practiced his "Hot Sauce" call for Dougie McBuckets.

More on the Bulls and McDermott

your friendly BullsBlogger •Blog a Bull

A Look Back at McDermott's College Career

More on the Bulls and McDermott

But perhaps Doug McDermott's greatest contribution to the Bulls could come if a certain superstar from New York City decides to pack his bags and leave Broadway and thin crust for Second City and deep dish.

Say Thibodeau is able to sell Mr. Lala Anthony on being a Chicago Bull, that's possibly the perfect scenario for Doug McDermott as well. He won't have to take on starter minutes right from the start, something he may have done if he was selected by teams like Phoenix or Charlotte. He can come in for Carmelo, get some minutes, and with his shooting touch, not much production will be lost in the process. The offense can still move fluidly, Melo can take a breather, and McDermott gets some quality experience. The Bulls would also have the option of going small, with McDermott at the 3 and Melo playing the 4 as he has in New York. Melo and McDermott would stretch the floor and drive down open lanes, and with Derrick Rose at the point and Joakim Noah, arguably the best passing big man in the NBA, at center, that's a very dangerous scoring lineup for Chicago.

Doug McDermott to the Bulls just makes sense on so many levels. Chicago has scouted him for years, and he was high enough on their radar that the Bulls sent their two first-rounders, players they could have targeted with those picks, just to grab him. Of course, we won't know for sure how good of a move this will be until McDermott hits the court this fall. But for right now, let's just say Gar Forman and John Paxson finally got one right.