The Big East will be without the West Virginia Mountaineers for the 2012 season, if you haven't heard. That would mean the Big East would need a football placeholder for 2012 or a new member to join early, which Boise State might do.

Did we choose that scenario to play out in the video game world? Of course not. There happens to be a little team called Georgetown who would like to get a crack at Syracuse before the Orange leave for the ACC. We decided to let them in this Fever Dream scenario (not to be confused with the UConn field goal Vision Quest) in which the Big East adds Georgetown for the 2012 football season. Why move a team from the Patriot League up for a year? It's not like anybody suggested anything like this...oh wait.

So here's how things went for the Hoyas during their year in the Big East.

So...Georgetown didn't do so hot. The quarterbacks combined for 16 TDs and 33 INTs. The wide receivers dropped 24 passes and there wasn't really a rushing game to speak of. The defense gave up the fewest yards in the conference but very often played on a really short field and gave up the third-most points. The Hoyas did land a player on the first-team All-Big East in their kick returner: 54 returns, 1304 yards, 1 touchdown, 91 long.

The Big East did well in the bowl season:

And how did that Big 12 move shake out for West Virginia in their first season (Garrett Gilbert stayed around for Texas in this alternate universe)? 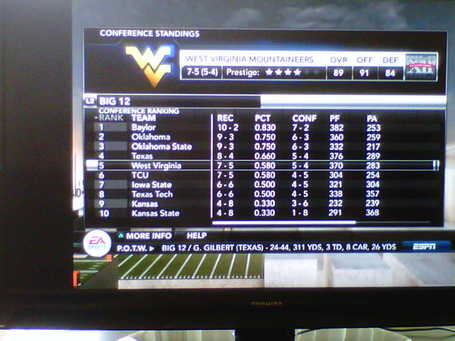 That 7-5 record was good enough to land the Mountaineers in the Holiday Bowl. They beat Utah, 38-6.