The Connecticut Huskies have done their best to try to win football games without scoring offensive touchdowns. I decided to see what would happen if they went an entire season without scoring an offensive touchdown. Could kicker Dave Teggart win the Heisman? Here's what happened when I fired up the PS3 to play NCAA Football 12 and ran through the 2011 season undefeated with the Huskies and only scored five touchdowns, all defensive.
In order to pull something like this off (winning 13 games with only 242 points scored), the defense had to be great and it was. UConn only allowed 73 points all season while scoring 30. To keep the defense off the field I rarely passed and ran the ball a ton. D.J. Shoemate is the default starter on the game at running back. He had an amazing season (2,024 yards on 308 carries) even if it was TD free. Defensive tackle Kendall Reyes was unstoppable on with 17.5 sacks, 30 tackles for loss and three forced fumbles.
But let's get back to the real star of the show, Dave Teggart. He hit all five of his extra point attempts and was 69/74 on field goals. That's right. The 69 made field goals mark obliterated the NCAA record of 31 set by Billy Bennett of Georgia in 2003. Teggart's 11/11 Big East Offensive Player of the Week performance in the first game against FCS East also destroyed the NCAA record of 7 made field goals in a game. In fact, 11 field goals made is two more than has ever been attempted in an NCAA FBS game. For his efforts, Teggart was named a first-team All-American and won the Groza Award for top kicker. However, Teggart was not even a Heisman finalist! The undefeated 2011 season is memorialized below the jump. 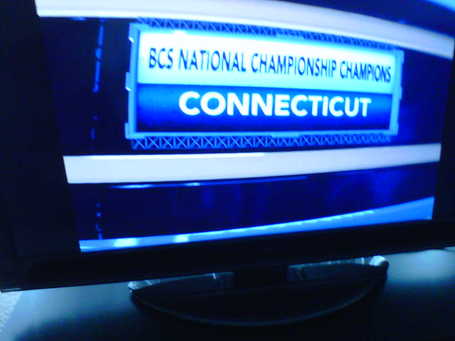 Sorry, Boise State fans. Although your team went 12-0, the video game BCS also kept you out of the title game for 12-0 UConn and 13-0 Stanford. There were no other undefeated teams.