Non-Conference Scheduling for Big East Baseball: The Good, The Meh, and the Ugly

A look at commitment and the non-conference schedule so far for Big East Baseball.

Share All sharing options for: Non-Conference Scheduling for Big East Baseball: The Good, The Meh, and the Ugly

For northern teams, most teams north of the Mason-Dixon line, college baseball is tough to play early on at home. There are many who believe this favors southern and west coast teams. There have been many proposals to address this issue, and perhaps the suggestions by the Big Ten Commissioner take the honor for being the most extreme. I'm not sure how I feel, but I think Indiana making the CWS in 2013 takes away from the argument for any extreme makeovers. The real issue is commitment to baseball and scheduling. First, we'll talk briefly about commitment and then we'll focus on the Big East's non-conference scheduling.

When I look at the Big 10, I see a decent model for the Big East. Both conferences will soon span from Nebraska to New Jersey. While the Big East television money is less, the schools are also smaller and all private. The money can go further if spent wisely. Lessons can be learned by watching which teams fare well, and which teams do poorly in both conferences.

Why do I compare the Big East to the Big Ten? The Big Ten is not a traditional powerhouse in baseball, but Indiana is committed, and with the addition of baseball committed Nebraska a few years ago, the Big Ten is getting better in baseball. While the Big Ten appears to be down from a year ago, they are still better than they were 2 or 3 years ago, and do appear to be on the upswing still for the long run. I won't say other Big 10 programs are or aren't committed because I don't know for sure, but with Jim Delaney pushing for it, I'd have to guess a couple other Big Ten schools are putting more of their windfall of cash into baseball. With a little more commitment to baseball, the Big East can emulate, if not surpass the Big 10 in baseball.

In order for the Big East to be successful in baseball, teams are going to have to challenge themselves early and often. Since there are less conference games, there are more opportunities to schedule good opponents, but also bad ones. Sure, there are plenty of non-conference games left to be played, but we're far enough into the season now to make some observations. I understand that the Big East came together pretty quickly and there was not a lot of time between the formation of the conference and the start of conference play. I hope in the future, when there is more time to plan, Big East baseball teams will be a bit more aggressive in general about scheduling.

Note about RPIs. All information was retrieved Saturday (03/29/14) morning from WarrenNolan.com 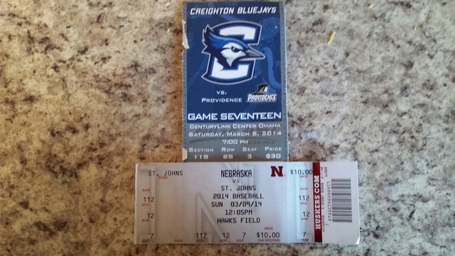 I attended senior night for Creighton Basketball and a St. John's baseball game in the same weekend.

Just about every team had one series where they challenged themselves and should be applauded for scheduling the series. Villanova played at Miami, a traditional CWS contender. Seton Hall played at Oklahoma and won a game. Seton Hall also played at Arizona, which while not a great team this year, is only 2 seasons removed from a National Title. St. John's scheduled series at Pepperdine and Nebraska, while playing in tournament that included Kentucky and Old Dominion. Xavier scheduled several tough non-conference games with the highlight being a 3 game series at North Carolina. Georgetown's series against neighboring Towson, defending Colonial Athletic Association champion, gives Georgetown 4 games (one came in a tournament) against a team currently in the top 50 of the RPI. Butler's best games are the last second 2-game series against Illinois State and the 2 game series against Mercer.

The overall non-conference schedules of Xavier and St. John's fit this category. While the schedules aren't overly aggressive, the schedules are both in the top 140 on Saturday morning. I won't cover individual series here as there are too many to cover in depth. Give these schools credit for scheduling tough games while not scheduling too many gimme games against lesser competition. Still, there is room for improvement here.

The overall non-conference schedules of Seton Hall, Butler, and Villanova.

Seton Hall is currently carrying the baton for the Big East in the human polls, being ranked 22nd in the Collegiate Baseball News' poll. I've been tracking the RPIs of Big East teams on a weekly basis, so according to my sheet, Seton Hall was 27th at the end of week 5. At 1st I was surprised by them tumbling ~40 spots in the RPI after a mid-week letdown against St. Peter's. Then I looked closer. Seton Hall's current strength of schedule is 247. One might argue that Arizona is extremely down this year which is hurting the Pirates, but that is not an excuse for the remainder of the non-conference schedule.

Butler has a similar strength of schedule coming in at 250. The have a couple of games against Purdue left, which should slightly improve this, but not enough for their non-con to be better than ugly. Scheduling more games, even away games, against in-state rivals Indiana and Indiana State may be difficult, but this may be a worthwhile and relatively cheap option for the Bulldogs to consider. The two state schools are currently at 35 (Indiana) and 25 (ISU) in the RPI.

Villanova just isn't giving me much to work with again. I felt I was a bit harsh on the team in my preseason preview of the Big East, but the truth can be the splash of cold water a program needs. The Wildcats non-conference strength of schedule ranks 283rd in the country out of 302. Two words: Schedule Better.

For the Big East to succeed in baseball, all teams will have to take more risks. I still see more hope and opportunity than despair for Big East baseball. Hopefully with more time to prepare for a Big East baseball season next year, we'll see improvement in those late season non-conference games.  A couple good series in exchange for bad ones would go a long way.