Share All sharing options for: Question and Answer with Trey Lowe about recruiting and off the court 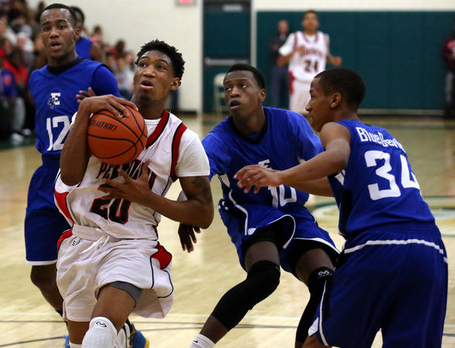 Trey Lowe, a class of 2015 Trenton, New Jersey recruit allowed Big East Coast Bias, to do a question and answer on a variety of things including basketball and what motivates him at times.

Big East Bias Coast Bias:For people who don't know you, tell us a little about your style and the school you go to?

Lowe: I go to Ewing high school, I play anywhere from the 1-3 im a smooth player who locks up on defense and can score from anywhere on the court.

Big East Coast Bias:What are your strengths? What are you trying to work on this summer during AAU?

Lowe: My strengths are my shooting ball handling and just being able to score from all over and i want to work on my defense and quickness. Also getting stronger of course.

Big East Coast Bias:Nice.What are somethings you worked on last summer that showed in your game this season?

Lowe: My jumping and acceleration and being able to take the bumps and grabs and my pull up.

Big East Coast Bias: True. Who do you currently hold offers from? What schools are showing interest? What schools you plan on visiting?

Lowe: Temple, Rutgers, Seton Hall, Drexel, Hofstra, Monmouth, Layfette, Lehigh, Rider, St. Joes, Boston U, Robert Morris, Quinnpiac, and Villinova. I also plan on visiting Vanderbilt. The only schools on the list that have not offered me yet is Nova and Vandy.

Big East Coast Bias: Do you have a top 5 in your mind and is Creighton showing interest?

Lowe; I do not have a top 5 yet and yes Creighton is showing interest.

Big East Coast Bias: Something that people should know about you off the court?

Big East Coast Bias:What motivates you everyday and is there a mantra you live by?

Lowe: Respected to be respected and my parents motivate me everyday.

Big East Coast Bias? What are some goals for this summer and who are you playing AAU for?