Calling it right now... 'Nova beats Xavier in the finals on Saturday.

Share All sharing options for: My Big East Tournament Bracket

Its that time of year again, when an entire season of build-up gets broken down into a series of interconnected lines. You don't need to know much about the teams involved or really even anything about basketball to fill out a successful bracket. Just write down a bunch of team names on the blank lines. In that spirit, here is my bracket for the upcoming Big East Tournament. 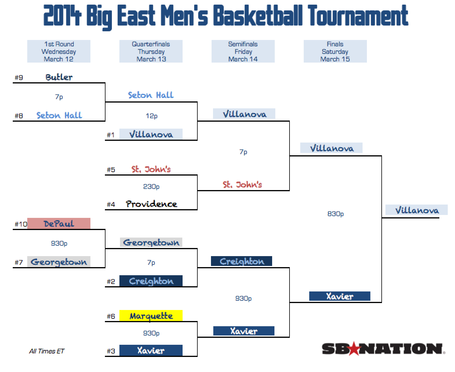 Thanks to VUHoops for the original bracket.

Seton Hall and Georgetown win on loser's day to advance against the top two seeds. Butler's knocked off the Pirates in two of their four Big East wins, but its hard to get a third against the same team. Especially with how bad the Bulldogs have looked against everybody else. The Hoyas will take care of DePaul, only to see their lingering Tournament hopes crushed by Doug (75-63 win over Creighton last week notwithstanding).

St. John's will beat Providence in the most meaningful game of the week. The Red Storm are as hot as anybody since mid-January and haven't gotten any attention for it. Knocking the Friars off the bubble will probably do more harm than good, however, as St. John's needs more than one top 50 win all season to dance. Xavier beats Marquette to seal their fortunes and Villanova advances to the semis as well.

In the Big East Final Four, the Johnnies put up a valiant defensive effort but ultimately can't score enough to keep up with 'Nova. The biggest upset of the tournament comes in the night game as Semaj Christon shows why he was a unanimous all-conference pick. The Muskies just happen to catch Creighton on another cold night from beyond the arc and advance to play for the Big East championship in their first season.

Ultimately, the league's most consistent team comes out on top again (mostly because they don't have to play Creighton). Villanova will be your 2014 Big East Tournament champs.