Providence College opens their season (as well as the Big East season) against a familiar foe - the Boston College Eagles. This Big East-turned-ACC rival from Chestnut Hill will be heading to the Dunkin' Donuts Center Friday night for a 6:00 PM tip-off in the 108th matchup between these two teams. Get all you need to know for Friday right here.

Six details about the game:

Bryce Cotton - It seems like there’s no rest for the ever weary. Bryce Cotton, a shooting guard by nature, had to fill part of the point guard responsibilities last season while freshman Kris Dunn and senior Vincent Council were both sitting due to injuries. While Cotton got accustomed to the point, the area he thrived in was the two. It was expected that Cotton wouldn’t have to take point guard responsibilities as much this season with a healthy Dunn, but during the exhibition game against Rhode Island College on Saturday Dunn re-injured his shoulder and was taken out of the game. He is officially day-to-day, and Cotton must reassume the point guard duties while Dunn heals. His performance as point guard will be critical against the Eagles.

Tyler Harris - While Cotton takes over point guard duties, transfer Tyler Harris must help carry the scoring weight. In the exhibition against Rhode Island College Harris came off the bench, but Harris shot 7-for-10 from the field and finished the game as the leading scorer for the Friars with 19 points. More impressive than his scoring percentage is how creative Harris can be with his scoring - he’s able to slash, hack, step forward and jump back. He was a perfect 4-for-4 from the charity stripe, but made just 1-of-4 from three-point land. Harris’ contributions on offense will be needed against the Eagles.

Brandon Austin - Boston College shoots more than their fair share of three's (in their scrimmage against St. Joe’s the Eagles connected on 14 of them), so locking down the perimeter is important to the Friars defensive scheme. To effectively shut the Eagles offense down the Friars will need to be large and quick. Brandon Austin fills both those needs. He’s agile and can react quickly, and at 6-foot-6 creates an ideal mismatch with guards. In order for Austin to be effective he’ll need to relieve himself of the nerves he showed early on in the Rhode Island College exhibition game and play the game the way he plays it.

Carson Desrosiers - While Kadeem Batts is familiar with his role as a Friar, this ACC-turned-Big East center will be essential to attacking Boston College on the inside and using his experience from playing against the Eagles while at Wake Forest. The Eagles are arguably weakest at the five, and while Batts can contribute meaningful minutes at both the four and the five, Desrosiers will be needed to help fill up the front court and keep BC from closing in if they can't connect from three point territory, and exploiting their front court on offense.

Three story lines for the game:

Moving on - There’s a lot of irony that the Big East season is opening against an ACC member that arguably began the destruction of the former Big East. When BC and Miami started the migration process in 2003 they were the sparks that caused an internal combustion with the football members that lasted almost a decade. While it was bad at the time, the end results seemed to work out for the best - the Big East got to remain a basketball-first conference, and the football schools…well, they had mixed results. So it won’t be lost on anyone that on the eve of a new-and-improved conference the opponent will be one indirectly responsible for causing it. 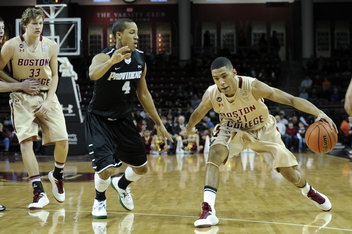 Starting anew - Of course, that’s not to say that fans will be looking to the past on Friday. Quite the opposite: there’s a new conference, a new network, and a new energy surrounding the conference, and the focus will be on the future rather than the past. To make looking forward even more exciting, this game will be the first ever Big East game broadcasted on Fox Sports 1, the official home of the new Big East.

Rivalry renewed - Then again, there’s much more than a conference rift between these two schools that makes the game exciting. Boston College is one of PC’s oldest and well known opponents, with a mere 45 minutes separating the two campuses. There’s a rivalry between these two programs, one that gets ignited no matter what the year or how good the teams are. Expect the buzz to be high in the Dunkin’ Donuts Center on Friday for this reason.

How long is Dunn done? - Kris Dunn is a talent that fans get excited over. At 6-foot-3 he’s fast, smart, a nightmare on defense, and as charismatic off the floor as he is on. When he injured the same shoulder that kept him out of the Friar lineup for 11 games last season fans were heartbroken. Although as of tonight he’s officially listed at day-to-day, the one thing every fan will want to know is how long will it be before Dunn takes the floor again?

Who will be starting? - This question seems arbitrary, but the reason this question is important for the fans is because for the first time in a long time the Friars have a very deep and talented roster. Seeing who will be leading the team on Friday will tell a lot about who Ed Cooley trusts, as well as provide insight on some of his thinking against a near-top 25 talent such as Boston College.

Friars have some hiccups to start the game but pull it together towards the end of the first, and come out strong in the second-half to win a tightly-fought game by six.