Villanova continues their dominance at home. They're 2-0 after thrashing the Mountaineers with help from multiple Wildcats in double figures.

For the second time in five days, Villanova dominated an opposing team in the second half of play, but this time in a different manner than anticipated.

The Wildcats outscored Mount St. Mary's 60-16 in the paint en route to a 90-59 victory Wednesday night at the Pavilion in front of a packed house in Radnor, Pa. Five Wildcats scores in double figures and were led by junior forward JayVaughn Pinkston who recorded his second consecutive 20-point game, by collecting 21 points in 28 minutes and grabbing two rebounds and a block.

Darrun Hilliard also shot well from the floor. He scored 18 points (8-for-10 shooting) in 24 minutes and shot 50 percent from the perimeter. But the main player for the Wildcats in a 46-point second half, came from the efforts of freshman Josh Hart.

Hart's tenacity on the court was well documented in his first outing as a Wildcat and it poured into Wednesday night in a big way. Hart finished with 17 points and 11 rebounds, Villanova's first double-double of the season. Yet between the five players in multiple scoring, Coach Wright still was excited by the effort his team showed.

From Mike Sheridan of the Villanova Media Department:

"I thought we played well," stated Villanova head coach Jay Wright. "I was very pleased with how we played. We have work to do but I thought we defended the three pretty well for us. Probably a great 3-point defensive team wouldn't have been happy with that, but from where we've been, it was a good effort."

The Wildcats struggled against the Mountaineers early, something that wasn't expected from a lowly-Northeast conference team. Big man, Daniel Ochefu, got into early foul trouble and 'Nova looked rattled starting off behind the Mountaineers 8-7. But it was the defensive efforts of Philly-native Tony Chennault that helped spark a 16-0 run that saw Villanova take the lead and never look back. It was constant ball pressure that took the Mount out of the game early.

But outside of Hart's amazing play and the scoring of Pinkston, it was Chennault, Philly's first-born, that shouldered the load for the Wildcats when it mattered most.

"He definitely gave us an infusion of energy. You don't have to run offense with him. He gets into the lane and can score. He gets people shots and it's valuable to have a guy like that."

Senior guard Julian Norfleet, the lead scorer for the Mountaineers, finished with 15 points and four assists in thirty minutes on 5-for-14 shooting, a poor display. Guard Sam Prescott also had 13 points in the loss. The Mountaineers missed forty shots (29.8 percent) against the Wildcats pressure defense on Wednesday night, shooting 17-for-57 from the field and shot similarly (29.6 percent) from the arc only hitting eight of twenty-seven shots. 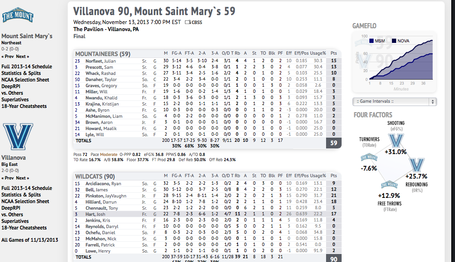