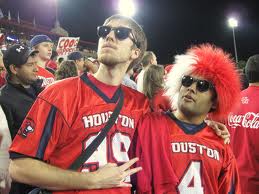 The Houston Cougars are coming off one of their best seasons in school history and looking to make another run through the Conference USA before moving to the Big East. This year’s road will be a lot tougher than last year, mostly because they have lost an experienced quarterback and they will also have a rookie head coach. While I would expect Houston to have a good season, it won't match last years 13-1 record.

Texas State- the Cougars will start their season off at home agianst the Texas State Bobcats. While this game should be a cake walk for Houston, I wouldn't be surprised to see some struggles early as the Cougars try to get their legs under them for the season. Cougars win this one going away.

Louisiana Tech- This game could wind up being a tough game at home for the Cougars. Louisiana Tech is a good team that is continually improving, and if the Cougars try to over look the Bulldogs, they will wind up getting beat. But the Cougars will be ready to play and win a close game over LA Tech, and start their preperations for UCLA.

At UCLA- the Cougars will travel out to Pasadena for a big game against the Bruins. Eventhough the Bruins have had a few down years, expect this game to be a tightly contested battle. Houston will find a way to win with their offensive weapons, but it will be high scoring game. Houston gets the W in a shoutout and starts preparing for the battle for the Bayou Bucket.

Rice- The annual battle for the Bayou bucket will take place on the Houston campus this year. This game should be a runaway victory for the Cougars because Rice isn't very good and Houston still has a lot of talent leftover from last season.

North Texas- the Mean Green make the trip down to Robertson Stadium after the Cougars helped them open up Apogee last season. It was a tightly contested game early but Houston pulled away late. I think this game will stay close all the way through, but in the end Houston will prove to be too much for the Mean Green.

UAB - After a tough game against North Texas, the Cougars will welcom in the UAB Blazers. Once again this game should be relativly easy for the Cougars and should produce an easy victory.

At SMU- Going into Dallas agianst an improved SMU team is going to be a tough feat this year, and I think SMUis going to have just a little bit more drive to grab the victory in the Conference USA showdown. A tough loss to SMU but building blocks for rookie head coach Tony Levine.

UTEP- After a tough loss to SMU, UTEP will come into Houston and be the "Sacrificial lamb" to the Cougars because this team will be mad and want to get back to winning. Houston should win this one easy.

At Eastern Carolina- Nothing like a trip outside of Texas to help build them team up and get them ready for the rest of the Conference slate. E. Carolina will be a tough opponent, but Houston will not be denied another victory.

Tulsa- After two wins of realitivly easy fashion, Houston will have their hands full with the likes of the Tulsa Golden Hurricane. This will be a game that could come down tot he last possession and unfortunatly for Houston; I think Tulsa just proves too tough.

At Marshall- A trip to Marshall will help the Cougars get over a tough loss to Tulsa and get back on the winning track. Houston gets scared early, but fights to an easy victory late.

After finishing the season 10-2(6-2) and being just on the outside looking in for the Conference championship game. The cougars will get an invite to play in the Armed Forces Bowl. A solid finish to their time in the Conference USA, and excitement will build for their joining the Big East in 2013.