Share All sharing options for: Gilbert; Looking for 2nd chance at SMU 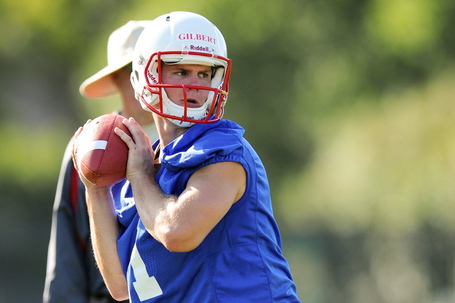 Garret Gilbert was a highly touted quarterback recruit coming out of Lake Travis High School, and was committed to the University of Texas. He was tabbed as the heir apparent to Colt McCoy and was going to continue the success that the school had enjoyed. Coming into the 2010 season he was named the starter but some wondered what the learning curve would be with little game experience. He did play for an injured McCoy in the national championship game but that was the most playing time he had the previous season.

2010 was a rough year for Gilbert, he led the Longhorns to a 5-7 record, but he was becoming an unpopular name around Austin. In 2011 he was named the starter again, but he had a much shorter leash because of two more highly touted quarterback recruits. The season started off poorly and Gilbert was soon benched and moved to the 2nd string behind McCoy and Ash. Then it was surprisingly announced that Garret was going to undergo surgery for a shoulder injury that seemed to come out of nowhere.

Then in October after a lot of speculation, Gilbert was granted access to transfer and he was seen at SMU practice later that week. Gilbert has taken a heavy course load at Texas to be able to focus solely on football at SMU and is now in camp with the Mustangs. Garret Gilbert is going to be one of the most experienced players on the Mustangs roster and the Mustangs hope that experience will help the team win a few extra games this season.

Garret Gilbert has a clean slate to work with and is hoping to take advantage of this 2nd chance at a school where there hasn't been a lot of success in recent history. Gilbert will have a little bit of a shock the first time he runs out of the tunnel, because SMU and most of their opponents don't draw 80 thousand to their games but at the same time, if he has a bad game, it won't take up the first six pages of the sports page either. He won't have the fans calling for him to be benched after one bad series, he will be able to work through his mistakes and build on them.

Not to mention that Gilbert will have a chance to learn under a great coach in June Jones. This is Gilbert's chance to finish his college career on a high note and he will take every advantage he can get from being at SMU. At SMU the goal every year is to be competitive in the conference and make a bowl game, and with Gilbert behind center, this year’s Mustangs team will have an opportunity at one of their best seasons in recent history.