Share All sharing options for: Let Him Who Is Without A Baseless National Title Claim Cast The First Stone

Tonight, my friend Matt Jones on his fine site, Kentucky Sports Radio, posted something, as is his custom, to embarrass Louisville. It seems Louisville is officially licensing shirts through Adidas that claim the men's basketball program has won four national titles, not the typical two that most associate with the program from 1980 and 1986. You can read Matt's post here.

Here's a look at the shirt, via KSR: 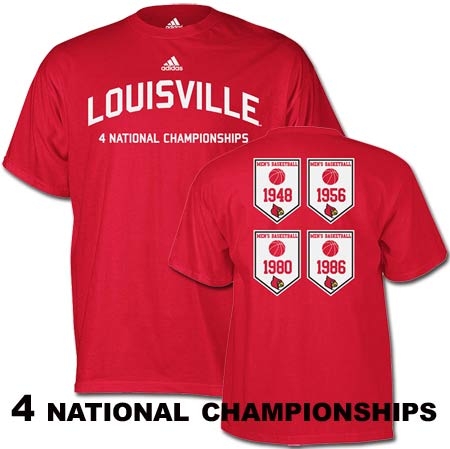 Matt's post is funny, and the shirts are worthy of being mocked. I wouldn't buy one. Of the fact that the shirt claims two titles that Louisville didn't win, Matt writes:

That my friends is little brother syndrome. Claim national championships you didn’t win, including one won by Big Brother. How long until a t-shirt comes out that claims they actually won the 2012 title as well. #L1CYaLater

What I don't think Matt knows, and if he does he certainly doesn't tell anyone this in his post, is that his beloved University of Kentucky Wildcats are guilty of the same thing, only in football. On the official Kentucky athletic website, we read this:

More than a decade after Gamage had left UK, a young man by the name of Paul "Bear" Bryant arrived on the scene at Lexington in 1946. Bryant quickly grabbed the UK program by the collar and turned the Cats into a national power.

Does it surprise you to learn that Kentucky won the 1950 national championship in football after defeating #1 Oklahoma in the Sugar Bowl? If it does, it should. On January 2, 1951, nobody anywhere considered Kentucky the national champion for the 1950 college football season. Why? Because in 1950, the final AP and Coaches Polls were taken before the bowls and the national champion was named in December. Bowls were an exhibition, nothing more. On January 1, 1951, nobody on the Oklahoma sideline thought they were lining up against Kentucky to play for a national title. That's why, when you visit the website of Oklahoma football, they proudly list their 1950 national championship. In the final coaches poll in 1950, Kentucky was seventh, behind Oklahoma, Texas, Tennessee, California, Michigan, and Army. The Wildcats were also ranked seventh in the final AP poll.

Update: Kentucky bases its claim for a national title on Jeff Sagarin retroactively claiming the 1950 team the national champion in the 1990s. I neglected to point this out in the first edition of this post.