Share All sharing options for: Houston Job is long time coming for Levine 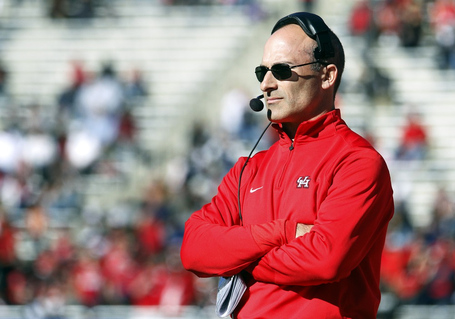 Tony Levine is going into his first season as Houston's first coach, but it won't be his first experience on the sidelines. Levine was named the interim head coach when Kevin Sumlin left for Texas A&M. It was during the lead up to the bowl game that the administration named Levine the head coach.

But his path to become a head coach wasn't paved with an easy road. Tony was a walk on receiver at Minnesota under Jim Wacker. After his playing days ended he followed his heart and became a coach at Highland Park H.S. in St. Paul where he coached the freshman team. He also founded and ran the Levine sports marketing group, doing events for the Minnesota Vikings and Timber wolves. But it was his love of coaching and teaching kids that really made him happy.

In the 96-97 Basketball season, the Minnesota Golden Gophers were doing something special on the court and Tony made a commitment to follow his Alma mater wherever they played. This lead Tony to San Antonio where he met up with his former Offensive coordinator Bob DeBesse, This would ultimately end up being the beginning of Tony's College coaching career.

As Tony was getting ready to head home to Minnesota, DeBesse offered him a "Restricted earnings" position at Southwest Texas State (Now Texas State), where DeBesse had just been named Head Coach. Tony promised to stay 2 years if he was allowed to get his Masters.

At this time DeBesse told Levine, If he wanted to be a Division 1-A coach he would have to start hanging out with D-1 coaches. Levine completed his Masters at SW Texas, and in 2000 he got offered a job at Auburn where he would end up being on a staff with Tommy Tuberville, Gene Chizick and Bobby Petrino. From there he was offered an assistant coaching position at Louisiana Tech.

When Bobby Petrino was named head coach at Louisville, he called Petrino in to become part of his staff. Levine stayed there until 2006 when he got a chance to go coach with the Carolina Panthers in the NFL. Then when Kevin Sumlin took over for Art Briles in Houston, Levine was called in to be the Tight ends and Outside receivers coach.

In December when Sumlin announced he was leaving for Texas A&M, there were few outside of Houston who knew Levine’s name. It seemed to shock a lot of people around the country when he was named the Head Coach; he has worked for this opportunity and is very deserving. He will be the head man to lead Houston into a new frontier in 2013 when Houston moves to the Big East.

While there are some big shoes to fill after Briles and Sumlin, everyone around the program is confident Tony will be the right man to lead Houston into the future.