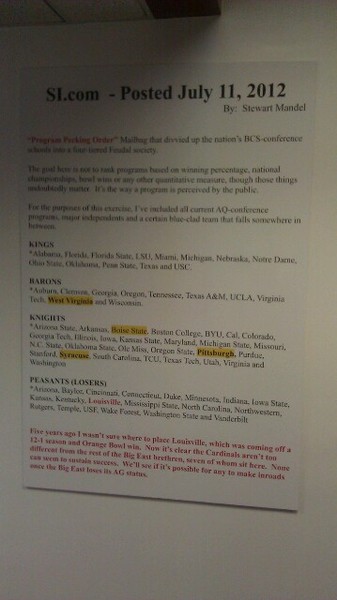 The picture above was taken by Adam Lefkoe (@AdamLefkoe) of WHAS here in Louisville. It's a poster-sized blow up of Stewart Mandel's Sports Illustrated piece that broke college football programs up into tiers.

To motivate his team, Louisville head coach Charlie Strong has blown up the article and made sure his players can see that Mandel 1. Placed Louisville in the 'Peasants' portion. It appears they took the liberty to add "LOSERS" to the description of the Peasants category. 2. Placed Pittsburgh, Syracuse, West Virginia, and Boise State were placed into tiers above Louisville. Boise State being highlighted is likely because they're going to be moving into the Big East next year. Syracuse and Pittsburgh are probably highlighted because they're on the schedule this year. West Virginia being highlighted? Motivation because they got into the Big 12 over Louisville? Motivation because they're looked at as a superior program despite Louisville having won in Morgantown in 2011? It's hard to say.

Coaches will use just about anything to motivate players. We've seen Charlie Strong make posters of preseason magazine predictions that Louisville would finish in last place in the Big East, put Kentucky logos in the urinals, and now this. I imagine Louisville isn't the only program using these assessments as motivation.