According to multiple reports, Pittsburgh filed a lawsuit against the Big East today in Pennsylvania in an effort to ensure that it would be able to exit the Big East and move to the ACC after the 2012-2013 season. Upon filing the lawsuit, Pittsburgh issued the following statement:

"On September 26, 2011, when we notified the Big East that we were withdrawing from the conference, we paid the first half of the exit fee of $5 million. When the 2012-13 season is complete, we will have competed in the Big East for two seasons, thus providing ample time to re-form the Big East Conference for the future. Beginning with the 2013-14 season, the Big East will actually have four more football playing schools and more schools overall than when we gave notice that we were moving to a different conference.

Although the Big East's stated position is that we must stay through the 2013-14 season, the Big East acknowledged publicly that a discussion of our departure after the 2012-13 season was appropriate. A few weeks ago, Steve Pederson met with John Marinatto to begin the process to work toward an exit after this upcoming academic year. The Commissioner indicated that he was doing this with the authorization of the Chair of the Big East Presidents. However, attempts to contact the Big East in the following weeks to move the process forward have been unsuccessful, leading us to conclude that negotiations would not occur. Given the change in leadership of the Big East and the lack of response to our attempted contacts, on Friday, May 11, 2012, we filed a law suit in the Court of Common Pleas of Allegheny County, Pennsylvania, seeking resolution of this matter. We are confident in our position as stated in the complaint, but believe that this matter is best resolved between the parties. We have notified the Big East of this action, and continue to hope that our departure can be accommodated through private negotiations."

Why is Pittsburgh suing to ensure that it gets out of the Big East after the 2012-2013 season when most people believe is was a mere formality that such an exit would be negotiated anyway? First, Pittsburgh and Syracuse had worked with former commissioner John Marinatto and by all accounts the negotiations had been cordial, to the point that Marinatto even hinted publicly that Pittsburgh and Syracuse would be able to leave early now that the conference's expansion plans were complete. Now that he's gone, perhaps Pittsburgh feared the next person in leadership will not be as accommodating.

I think Pittsburgh also fears some of the rumblings that Boise State is wavering on coming to the Big East in 2013 might cause the Big East to try and force them to stay the contractually obligated (but obviously unenforceable) additional season. In an effort to get ahead of a possible last second effort to keep them in the Big East, they filed suit. By filing the lawsuit now, they're making it clear that they will not be staying.

In the complaint, the university asked for a jury trial to rule on its requests, which include allowing Pitt to withdraw from The Big East Conference at the end of the 2012-2013 conference year without penalty or interference; sharing revenue received by the conference during the 2011-2012 conference year, including money received from TCU and WVU; and reimbursement for damages such as the fees Pitt paid to secure the lost home games with TCU and WVU and to secure replacement games with lesser rivals, the lost ticket sales from disappointed fans, court costs and other financial losses. The Big East has stated that Pitt must remain in the conference through the 2013-2014 season.

I'm not an attorney. I might be the only blogger that did not at least attend law school, so I won't comment on the legal chances of that argument in court. Hell, Pitt will probably win. Nevertheless, I can't help but laugh at the gall of suing for damages when it was Pittsburgh and Syracuse's decision to leave the Big East in the dead of night, without warning, that led to West Virginia and TCU seeking conference affiliation elsewhere and therefore dropping off of Pittsburgh's schedule. Still, in conference realignment, there's not one ounce of shame.

So enjoy Pittsburgh, ACC. ESPN will certainly enjoy broadcasting this on Friday nights beginning in 2013. 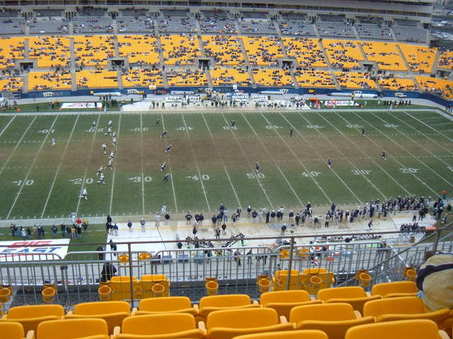