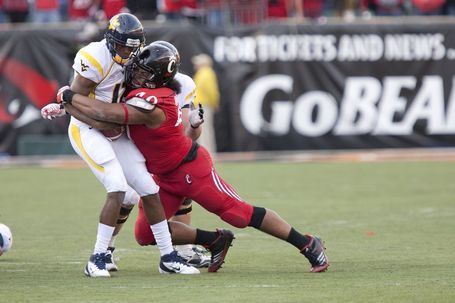 Instead of adding depth at wide receiver and passing on some possible targets for new quarterback Brandon Weeden earlier in the round, the Browns traded the No. 67 pick to Denver to drop 20 spots and get Hughes, a 6-foot-2, 309-pound run stopper. Cleveland also acquired pick No. 120 (fourth round) in the deal.

Hughes was the first defensive player selected by the Browns, who still have seven picks to use.

The Browns have selected Cincinnati DT John Hughes (6-2, 304) with their third-round pick. The selection came as a surprise considering they're set at the starting positions with Ahtyba Rubin and Phil Taylor. Hughes is a stronger run blocker than pass rusher. The Browns have little depth in the middle of their 4-3, so Hughes could help.