Can Larry Brown change the culture at SMU?

Share All sharing options for: Can Larry Brown change the culture at SMU? 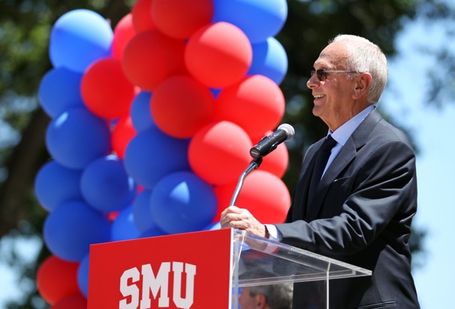 Now that Larry brown has been named and introduced as the new Men's basketball coach at SMU, there is the prevailing question...Can he change the culture at SMU? In his introuductory press conference, he talked about playing at Moody coliseum during his ABA days and trying to make it a tough home court advantage. He said it could rival the atmosphere at Cameron indoor stadium. Only thing, there is not the winning tradition or championships to build around.

SMU has a passionate fan base, and the surrounding area is the type to show up for a winner. But this will not happen over night and Texas is a football crazy state, so even then, there won't be an out pouring of support from the start. But any improvement in attendance will be an improvment over the 2,000 average from this season. There is still a question if Larry Brown is the right man for this job.

Larry Brown is a good coach, but he has been away from the college game for over 20 years and has shown that he won't be loyal to anybody for an extended period of time. This really makes me wonder if he can stick around long enough to start a culture change. The key to success will be to bring in quality assistant coaches who could show recruits a commitment to turning things around on the hilltop. Larry Brown is a good coach and can help change things at SMU, but only time will tell if he is able to change the culture and turn SMU into a contender.