Share All sharing options for: 2012 NFL Draft: Syracuse Defensive End Chandler Jones Looks To Be A First Round Pick 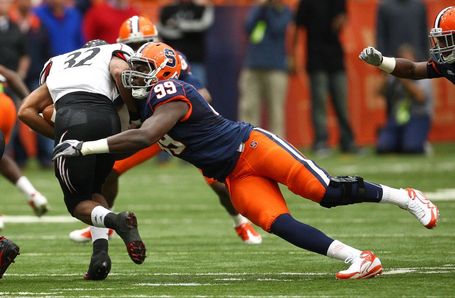 Syracuse defensive end Chandler Jones could be the only Big East player taken in the first round of the 2012 NFL Draft tomorrow night. He might be taken even earlier than was once thought. A number of analysts and mock draft have had Jones as high as to the Patriots with the 19th pick. Now it appears he could be moving up a number of different teams' draft board.

NFL Network scout Mike Mayock has his top 100 players ranking for the draft and has Jones ranked as the ninth best prospect in the draft. According to Rotoworld.com, Mayock had this to say about Jones:

"I'm gonna make a statement," said Mayock. "Three years from now, I'm gonna say Chandler Jones is the best defensive player to come out of this draft." Chimed in Lombardi, "I think what Mike Mayock said is right. He is the best defensive player in the draft." Mayock recently bumped Jones to No. 9 overall in his top-100 rankings, and to No. 1 among defensive ends. Lombardi went so far as to suggest Jones could be a top-ten pick

Echoing the high praise from Mayock, NBC Sports' Evan Silva's last mock draft has Jones going to the Eagles with the 15th pick. The Eagles are definitely looking to upgrade their defensive line, and Silva believes if Jones is there, he'll be the pick. Other mock drafts have suggested the Eagles would be interested in defensive tackles like Fletcher Cox or Dontari Poe.

If Jones is now being projected as high as 15th, even if he doesn't go there, it's hard to imagine him falling all the way out of the first round.