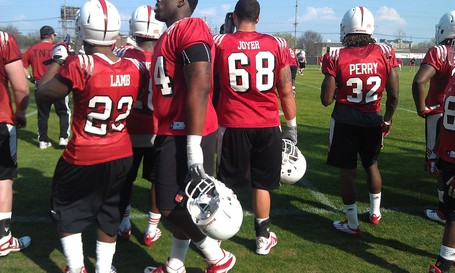 Louisville opened its third spring camp under head coach Charlie Strong today with a roughly two hour practice, in shorts, with no contact allowed. Obviously, these kinds of practices don't provide onlookers with much concrete information. Nevertheless, here's just a couple of things I picked up watching the team yesterday.

1. Remarkable Change In The Size Of The Defensive Front Seven - Comparing the defensive line and linebackers to the group that saw the field in Charlie Strong's first season, and even last season, the Cardinals will field their biggest, most athletic group in Strong's three seasons this year. Recall that in 2010, Strong had to play much of the season with freshman Brandon Dunn at 272 pounds at Greg Scruggs at 268 pounds at defensive tackle. This year, both defensive ends should be bigger than that. Junior BJ Butler is now up to 273 pounds while sophomore BJ Dubose is up to 6'5, 275 pounds without either showing a loss of quickness. Backing them up, Marcus Smith is up to 256 pounds while sophomores Lorenzo Mauldin and Deiontrez Mount are both over 240 and have put in noticeably more upper body muscle mass. The starting defensive line and linebackers are more athletic than they've ever been, while being an average of 18 pounds heavier than they were in 2010.

2. Louisville Has Great Running Back Depth - The depth is so good that a talented kid like Kamal Hogan was moved to strong safety to get him a chance to get on the field. Jeremy Wright is healthy and looks ready to be the back he's been built up as, Dominique Brown is working solely at running back this year, Senorise Perry is a nice change of pace back, and now the much-anticipated Corvin Lamb is pushing for reps. Lamb is short (5'9) but thick (216) and has enormous arms. He runs low to the ground and is a true one-cut back. Louisville should be able to field a fresh running back all year and this is without even having to use freshman Brandon Radcliff when he arrives in the fall.

3. The Early Enrollees Look The Part - Particularly Keith Brown. Brown is 6'1, 230 pounds and was already running at outside linebacker with the first team in yesterday's practices. He's an effortless, fluid runner that just looks like a top prospect. I would not be shocked to see Brown a starter from day one. James Burgess is even quicker but not nearly as big as Brown and while he'll probably play pretty early in his career, could stand to get a little bit bigger.

4. The Tone Of Practice Has Changed - I'm not at all saying that the coaches are letting up on the players, so don't take this the wrong way. I'm only saying that in the first spring practice in 2010, the coaches sounded like a set of drill sergeants and in 2011 they sounded like angry drill sergeants. This season there is still plenty of yelling, but you can tell almost immediately that this is finally a spring where everyone isn't starting from scratch. In 2010, the players were all learning a new system, in 2011 they were dealing with the loss of 27 seniors and everyone was in a new position or role. This year, the team has numbers and it has experience in the system and it shows. More coaching and refining, less breaking down and building back up from scratch.