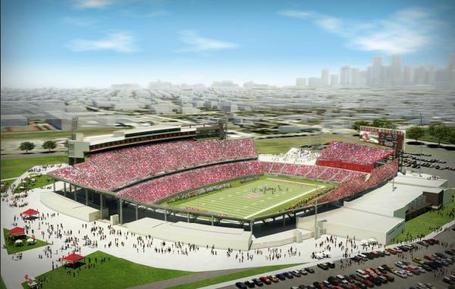 A new football stadium for the University of Houston Cougars has been in the works for quite some time. With a move to the Big East scheduled for 2013, making facilities improvements has become a priority. Yesterday, Houston students passed a referendum approving a $45/semester fee increase to help raise funds to begin stadium construction. According to a message from athletic director Mack Rhoades on the Conference USA website, the fee increase will raise just under $3 million dollars in one year for the project. Rhoades' message indicated that by approving the fee increase, construction activities for the new stadium will begin as soon as the 2012 regular season ends in December.

Houston has been planning and fundraising to build a new on-campus football stadium for nearly two years and now appear ready to begin actual construction in December. The new football stadium will be built where Robertson Stadium currently sits. Plans currently call for a stadium that will seat around 40,000 and be easily expandable to the 50,000 range should it be necessary. This is very similar to what the University of Louisville did in 1998 when Papa John's Cardinal Stadium was opened in 1998 with a capacity of 42,000 and was subsequently expanded to 55,000 in 2010. You can view a gallery of some of the plans for Houston's new stadium here.

Houston's plans will also care for the renovation of Hofheinz Pavillion, the home of Houston basketball. Given the basketball-centric nature of the Big East, it is encouraging to see the Cougars doing their best to upgrade basketball facilities as well. This has been a trend among current and future Big East members. Fellow new Big East basketball member Central Florida is playing in a new 10,000 seat arena that just opened for the 2007-2008 season. South Florida is currently renovating the Sun Dome and will re-open it for next basketball season as well. Last year, Louisville opened the new KFC Yum! Center, one of the best arenas in college or professional basketball.

Be sure to check our Big East Expansion section for further updates on future Big East members as their entrance into the Big East draws closer.