As has been their habit this season, Louisville is using something from an opponent, via the media, has a source of motivation for Friday's game.

Munchie Legaux told a group of assembled local media that he thought Louisville Teddy Bridgewater was a good quarterback. He also told them he thought he was better. Tomorrow night's game already promised to be the most intense home game of the season for Louisville with Cincinnati being an old rival and both being in contention for a Big East title. Legaux's words have added to the intensity.

At UL for Fri's Cincy game. If Munchie Legaux thought his comments abt Teddy Bridgewater went unnoticed..um, no twitter.com/jemelehill/sta…

Before I could finish writing this, Jemele Hill deleted the Tweet with the picture in it, but I saved a copy of it. This is it. 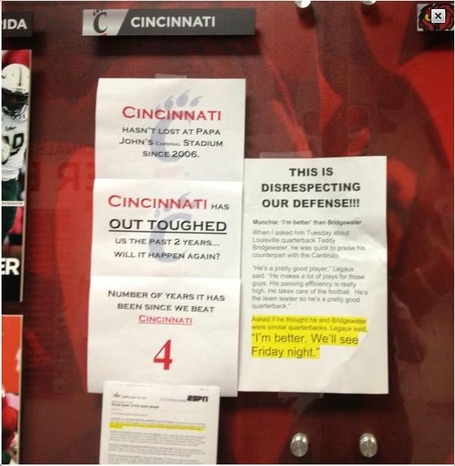