Share All sharing options for: AP And USA Today Coaches Polls: Syracuse Falls From No. 1, West Virginia Not Ranked?

As expected, Syracuse dropped from its position atop the Associated Press and USA Today Coaches Poll rankings that were released today. Syracuse and Murray State had been the only remaining unbeaten teams in Division I basketball, but after being upset at Notre Dame on Saturday, the Orange dropped to No. 3 in the AP Poll and to No. 4 in the Coaches Poll. Kentucky was the new No. 1 in both polls, though Syracuse still got two No. 1 votes in the AP Poll. 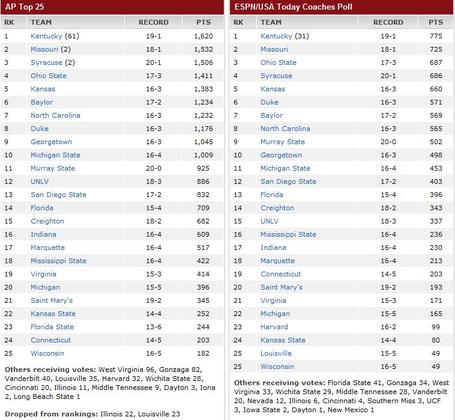