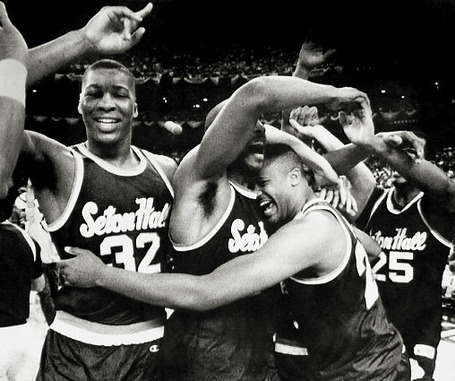 Classic Big East is BECB's whimsical journey through the time fog to recapture memorable moments from the conference's past. Just think of this as your Big East oldies station.

The Seton Hall Pirates have only managed to make the NCAA Tournament nine times in their 100+ years of basketball history. All nine of those appearances have come in the past 25 years. With such a dismal performance in basketball over the years, Seton Hall was still sought out as a founding member of the newly formed Big East conference in 1979. It would take the Pirates seven seasons in the league to even post a winning record.However, head coach PJ Carlesimo begged for patience and after four very lean seasons, finally posted a winning record in 1986. The following season Carlesimo's Pirates earned their first ever bid to the NCAA Tournament after finishing sixth in the Big East conference and posting a 20-11 regular season reason. The following season, Carlesimo led the Pirates on the greatest run in school history as Seton Hall reached its first Final Four and was a single point short of winning a National Championship.

Carlesimo was ashamed to talk much about just how difficult a job he inherited when he took over Seton Hall in 1982. The team played in 3,200 seat gym that was rarely full. There were only two baskets in the practice facility so players couldn't practice on side baskets if there were drills going on the main floor. The players had no workout facility to lift or train. Many had to go to private gyms to lift weights in preparation for the season. In 1987 there were some rumors that the Big East was considering removing Seton Hall as a member. After a rough 1982 season in which the Pirates went 6-23, Carlesimo made it clear to his athletic director what he needed to succeed. Little by little things improved and by 1988-89, Carlesimo had a much better program than what he'd originally walked in to.

As improved as Seton Hall was, however, the team was picked to finish seventh in the Big East by the media in preseason polling but the Pirates exceeded those expectations and finished second in the Big East and were at one point ranked ninth in the AP Poll. The Pirates had impressive wins out of conference over Kansas and Kentucky and had an impressive record in the Big East as well. After getting bounced in the second round of the Big East Tournament, the Pirates were pleased to earn a three seed in the West Regional and felt comfortable they could make some noise in the tournament. They were right.

Led by guard John Morton and forward Andrew Gaze, Seton Hall headed to the NCAA Tournament and actually got its stiffest test in the first round. A plodding and tough defensive Southwest Missouri State team turned the opening game into a slugfest but Seton Hall still won 60-51 to advance to the second round and face the 11 seed Evansville that had upset the six seed, Oregon State. In game that was much more suited to their preferred up tempo style, the Pirates dispatched of Evansville 87-73 and advance to their first ever sweet sixteen. Their reward was a matchup against the two seed, perennial powerhouse Indiana.

The Hoosiers were a late blooming team that had sat outside the top 25 for much of the early season, but by year's end were a top ten team and Big Ten champion. They proved to be no match for Seton Hall and its willingness to run. The Pirates out ran Indiana 78-65 and earned a trip to the Elite Eight to face one of the nation's burgeoning powerhouses - UNLV. The Runnin' Rebels were just the four seed in the West Region, but, were coming off of a one point upset of the one seed Arizona. Led by future stars like Greg Anthony and Stacey Augmon, the future of the dominant UNLV team of 1990 and 1991, they figured to be no east out in the  Elite Eight for Seton Hall. But, such was not the case. In one of the most dominant efforts in school history, Seton Hall blew out the young UNLV team 84-61 to earn its first ever trip to the Final Four and some national prominence.

Seton Hall was clearly the odd man out at a Final Four that featured big named schools like Illinois, Michigan, and of course, Duke. Still, Seton Hall acquitted itself well and did not appear to be blinded by the spotlight at all. Much like the game against a young but talented UNLV team, Seton Hall's game against Duke in the national seminfinal figured to be a battle. Instead, it was once again a dominating win that awed onlookers as the Pirates ran away from Duke 95-78 to earn a shot at a national title. They would meet another overachieving team in Michigan, led by first year head coach Steve Fisher.

Unlike their previous games where they'd been able to run and outscore their opponents, the Pirates were forced into more of a half court game with Michigan that resembled the first round win over Southwest Missouri State more than any of the other NCAA Tournament games. Led by Glen Rice and Rumeal Robinson, the Wolverines led the game at halftime 37-32 and seemed in control in the second half. Then Morton and Gaze woke up late and came back to tie the game late and a Glenn Robinson miss at the buzzer forced the game into overtime. Leading by one with just three second left in the game, Seton Hall was called for a critical foul, Michigan made both late free throws to take a one point lead and a desperation three from Morton was off the mark, sealing the win for Michigan.

While Seton Hall has struggled of late, it still proudly belongs to the Big East basketball heritage that the tiny catholic college in New Jersey was just a single point from bringing home a national title.