Share All sharing options for: Origin Stories: Patrick the Ruminator

Ever wonder how an LSU graduate and diehard Tigers fan came to manage a Big East blog? Well here's the answer, well, sort of. It's Origin Stories: Patrick the Ruminator.

1984: (Soundtrack, even though Fogerty is just faking) Future Big East Coast Bias manager Patrick the Ruminator is born in Acadiana.

My father was a Yankee (gasp) who grew up in a small town Indiana and who was a Catholic and a Notre Dame fan. Thus, despite the existence of LSU some sixty miles away, the household is interested primarily in Notre Dame sports. I've seen Rudy more times than you. "Who's the wild man now!?"

1995: A pivotal year. Notre Dame joined the Big East. Coach K Basketball also came out that year on SEGA. Notre Dame was not on that game. LSU was on the game but was ranked 30th of 32 and was awful. Shaq had already made all his money at LSU and gone on to the NBA, after all. Villanova was better than their ranking because they had New Orleans native Kerry Kittles. Connecticut had Ray Allen. I used those teams a lot while playing the video game too much. In real life, Notre Dame was going through lean years in basketball but had the duo I watched who tried to carry the team during the mid '90s to the early 2000s: Pat Garrity and Troy Murphy. Just as Mike Brey arrived in South Bend I had pretty much given up on Notre Dame and focused in on where I was eventually going to college: LSU. I also became a fan of better basketball like the kind that was being played elsewhere in the Big East.

2003: The Final Four is played in New Orleans. Syracuse beats Kansas. I don't like Kansas. Good times were had by all.

Also in 2003: LSU wins the SEC in football and goes on to win their first BCS National Championship in a game played in New Orleans. 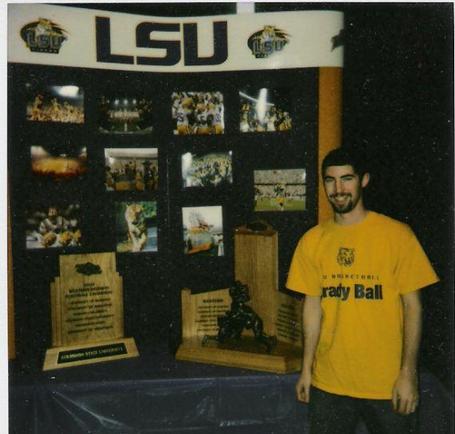 2006: Patrick the Ruminator moves to Hawaii and becomes a beach bum graduate student.

2009: After talking to a professor more about football than political theory, said professor's advice is taken. One-Handed Grab (I still post things there from time to time) is started just in time for Bowl Season. During that Bowl Season, UConn's Kashif Moore makes the blog proud with this one-handed grab against Steve Spurrier's Gamecocks. Spurrier is an old enemy from his days coaching Florida. UConn was a team I had followed since Dan Orlovsky was quarterback. I was initially very excited about him when he joined the Detroit Lions (formerly my favorite NFL team, Barry Sanders started it, Jon Kitna ruined it).

2011: The Big East basketball tournament is going on and Kemba Walker is carrying the Huskies to the final. Plenty of people are watching the tournament including Mark Ennis and myself. Via twitter DMs we wonder why nobody had thought of a Big East basketball and football site for SB Nation before. We hammer out some details and pitch the idea which becomes a website in April, 2011.

That's about it, I guess.