Does Charlie Strong Really Have the Worst APR Among College Football Coaches?

Share All sharing options for: Does Charlie Strong Really Have the Worst APR Among College Football Coaches?

CBSSports.com's Brett McMurphy, one of our very favorite reporters covering college football and the Big East, published an article today lauding the academic performance of the coaches listed as having the top ten Academic Progress Rate (APR) rankings. McMurphy states from the outset that the rankings were compiled for the years from 2003-2004 through 2009-2010. He writes:

CBSSports.com compiled the APR averages of 109 of the 120 coaches in the Football Bowl Subdivision (FBS) using data provided by the NCAA. CBSSports.com's study is based on the NCAA's available data between 2003-04 and 2009-10 so 11 coaches debuting this season were not included.

McMurphy rightly points out CBS excluded 11 coaches who are in their first ever year as head coaches. With that criteria, the highest ranked head coaches are Northwestern's Pat Fitzgerald and Clemson's Dabo Swinney. Our issue comes with the table listing the bottom ten APRs for coaches. The lowest APR listed? Charlie Strong, with a sickeningly low 869.

The problem with listing Charlie Strong with that APR is he didn't become the head coach until December 14, 2009. The 869 score reflects the 2009-2010 school of which he was only the head coach for one semester. By the time Strong was hired, the fall 2009 semester was already over and should be attributed to Steve Kragthorpe. In fact, when one searches the official NCAA coaches database, this fact is pointed out clearly. Couldn't McMurphy and CBS have taken the time to at least point this out since the NCAA clearly does in its database? 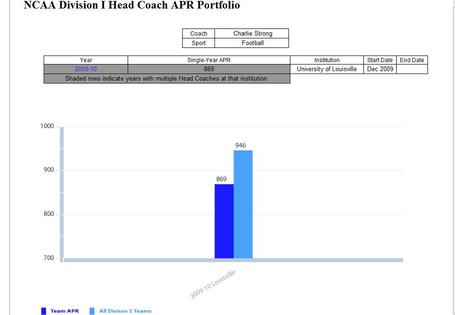