Report: Holgorsen Has Already Had as Many as Six Alcohol Related Incidents at West Virginia

Share All sharing options for: Report: Holgorsen Has Already Had as Many as Six Alcohol Related Incidents at West Virginia 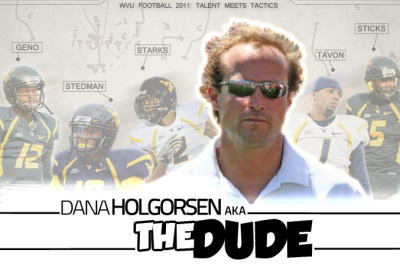 According to a report by Chuck Landon in the Huntington, WV Harold-Dispatch, the initial report last week that West Virginia head coach in waiting Dana Holgorsen was escorted from a casino by police was not his first brush with the law. The report states that Holgorsen has been involved in as many as six incidents in the public eye that required intervention or action from the police. Landon reports:

The first five were hushed up, but the sixth incident at Mardi Gras Casino in Cross Lanes on May 18 has blown the cover off Holgorsen's embarrassing antics. Nitro police were called to the casino at about 3:20 a.m. on May 18 to remove an apparently intoxicated customer who didn't want to leave. Holgorsen was asked to step outside, sit on a bench and await a taxi. No charges were filed.

Big East Coast Bias has never doubted Holgorsen's genius as a coach, but many have privately and now some publicly begun to question Holgorsen's ability to handle the spotlight of being the head coach at a major BCS program. In this case, the only BCS program in a football crazy state like West Virginia. What is most troubling to Holgorsen and Athletic Director Oliver Luck is Landon's report that school president James Clements is none too happy.

WVU athletic director Oliver Luck was summoned back to Morgantown from a Big East Conference athletic directors meeting by school president James Clements, according to sources. WVU's president reportedly told Luck that if he read one more article about the coach-in-waiting, it would cost Luck his job.

This situation will bear watching throughout the season.