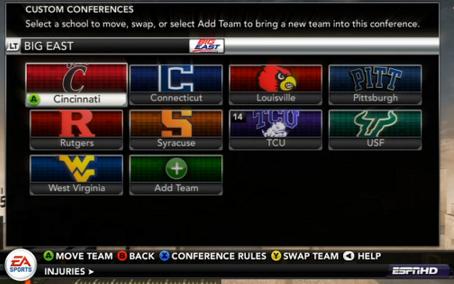 As you can see from the image above, the Big East gets disrespected again by EA Sports on NCAA Football 12. NAWT one team ranked in the Top 25 for 2011. Moving along, this post is about the tweaks to dynasty mode. The ability to add TCU to the Big East immediately depicted above is just one improvement.

If you spent any time (or rather wasted your time) doing recruiting on last year's game, you'll undoubtedly remember the ineffective sway pitch. For NCAA Football 12, the sway pitch (trying to redirect a prospect's interest either toward your school's strengths or away from its weaknesses) will be rewarded with bigger bonuses when it is successful and less of a penalty when unsuccessful.

CPU Scholarship Offers: Did you get bored out of your skull trying to do recruiting and just turned it over to the CPU? I know I did on last year's game only to find the stupid CPU wouldn't offer scholarships and I'd have to go behind and make the offers myself. Now, the CPU will handle that aspect of recruiting for you. In addition, the CPU will offer scholarships, as well as recruit in general, on your style of play. That way, you won't end up with the Pocker Passer when you are running the option.

Simulated Rushing Stats: Your backup running backs will get more carries during simulated play. The quarterback simulated stats will also be tuned down so that a running back has a decent chance of winning the Heisman.

Incoming Recruits: When NCAA Football 11 came out last year, the game was a beta version released to the public. There's no way to sugar coat that fact. The dynasty mode was broken in a sense because after four years there were only 2-4 elite teams left, then drop-offs after that were alarming. The reason was because the incoming recruits ratings were hot garbage and wouldn't improve much in four years no matter what kind of stats you put up. "Live tuning patches" after the game was released kind of fixed that but kickers and punters were still absolutely pathetic. These problems are supposedly fixed for this year's model.