Classic Big East is BECB's whimsical journey through the time fog to recapture memorable moments from the conference's past. Just think of this as your Big East oldies station.

September 1, 1991: Rutgers hosts Boston College in the first ever Big East football game. William N. Wallace of the New York Times brings us this report about the contest. This piece will be sprinkled with bits of Wallace's spot-on olde tyme reportage.

Following in the tradition of having beaten Princeton 6-4 in the first ever intercollegiate football game in 1869, Rutgers won the inaugural Big East football game 20-13. As Wallace put it "The Scarlet Knights defeated the Eagles, 20-13, this afternoon before a crowd of 22,185 spectators at Rutgers Stadium for the first Big East triumph." 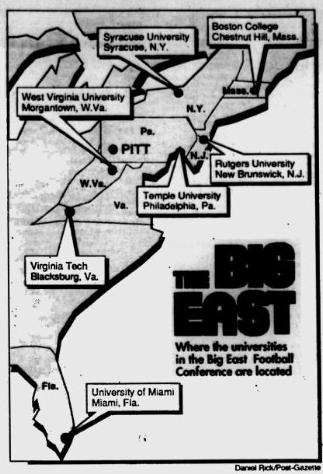 Don't say that the media has only recently been down on Big East football. Quoth Wallace: "Certainly the eight members of the Eastern league that for so many decades was an unrealized dream will stage more compelling contests than the one played today by Rutgers and Boston College." Hindsight is 20/20 but Miami, then a Big East member, went undefeated and won the 1991 AP national championship (Washington won a share of the national title based on the Coaches poll in 1991).

Back to the game, which was admittedly untidy and featured 4 fumbles, 13 penalties, a blocked punt, and "badly chosen timeouts to clarify confusion."

And who led the valiant but vanquished Eagles onto the gridiron that day? None other than current New York Giants coach Tom Coughlin. Here's Wallace at length:

Beginning a new era under a new coach, Tom Coughlin, Boston College showed persistence if not much else. Coughlin, a fomer New York Giants assistant coach, unveiled a Giants-type offense stressing inside running plays. It did little damage. Later, the emphasis went to the pass, since there was no other choice and the Eagles were behind. But Rutgers defended well.

The win set Rutgers on the road to a 6-5 campaign in 1991 while Boston College would finish the season with a record of 4-7. Although the Eagles have since departed for the ACC, they will be remembered for having participated in the birth pangs of Big East football on a hot day in New Jersey, circa 1991.