Virginia Politicians Kept Syracuse Out of the ACC in 2003

Share All sharing options for: Virginia Politicians Kept Syracuse Out of the ACC in 2003 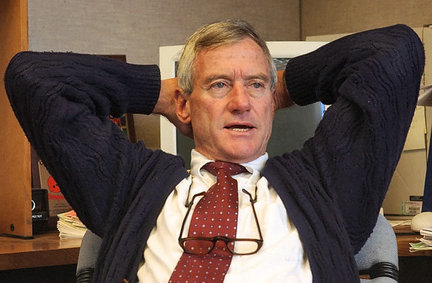 Tom Olivero of the Syracuse Daily Orange has a fascinating piece today on what happened the first time the ACC decided to plunder the Big East in 2003. According to Olivero, former Syracuse athletic director Jake Crouthamel believed the school had a formal invitation to join the ACC and was prepared to do it, before it suddenly vanished. What happened to the invitation?

Bill Leighty will be happy to tell you. He was, after all, the man who screwed a Virginia Tech-ACC license plate onto the governor of Virginia's car mere days after Virginia Tech and Miami joined the ACC in late June 2003 — days after Swofford called Crouthamel — with a smile on his face.

Leighty, the former chief of staff to Gov. Mark Warner of Virginia, knows the reason why Syracuse's invitation was revoked: Warner. The governor spearheaded a resilient lobbying and politicking plan in June of 2003 with the goal of the ACC and its presidents extending membership to Virginia Tech, Leighty said.

"I think a lot of people worked on it," Leighty said. "But the bottom line is it would not have happened without Mark Warner's involvement. Period."

Warner's expansive efforts targeted not only Virginia administrators and its Board of Visitors, but also Division-I presidents from the ACC and across the country.

What Leighty meant was that the ACC ultimately inviting Virginia Tech over Syracuse in 2003 was contingent upon Warner's efforts. His eleventh-hour lobbying ultimately persuaded seven of nine ACC presidents to vote for Virginia Tech. And it helped that then-University of Virginia President John Casteen was on Warner's side from the beginning.

According to Olivero, it was Syracuse, and not Virginia Tech that was the ACC's choice to come along with Miami to the ACC in 2003. It did not happen because Virginia governor Mark Warner worked politically behind the scenes to put pressure on the various ACC members to vote for Virginia Tech instead of Syracuse. How was Warner able to persuade so many schools to select Virginia Tech?

"What I can tell you is that John Casteen was supportive all along," Leighty said. "They did it very quietly, but I think that John Casteen recognized that it was a boost for the rivalry between Virginia and Virginia Tech, and I would actually say that Casteen and Warner were co-conspirators in this thing."

Crouthamel said he later found out Casteen was going as far as threatening to pull Virginia out of the conference if membership wasn't extended to Virginia Tech — whether or not that was just a scare tactic was never tested.

Considering the reports that schools such as USF and Kentucky have gone out of their way to block the efforts of Central Florida to move up to the Big East or Louisville from moving to the SEC, it's amazing to think about a climate where a governor would work so hard to get one school into the same conference as another in-state school. But that's what happened for Virginia Tech. They should be thankful for such leadership helping them land a spot originally intended for someone else and they should be commended for making the most of it once they had it.

Still, there was a chance for Syracuse to become the conference's 12th team a year later, but by that time, Crouthamel was turned off by the entire ordeal and had decided to work with Pittsburgh Chancellor Mark Nordenberg to refashion and strengthen a new Big East. When Crouthamel balked, fellow Big East member Boston College quietly lobbied for an invitation and got it. Thus leaving Syracuse in the Big East to try and pick up the pieces.

What does all of this tell us? It tells us that Big East members have always been looking for an exit door and have never once hesitated to stiff one another to get it. Syracuse believed it had a deal in place to join the ACC. Virginia Tech worked behind the scenes to snag that offer instead. Syracuse could have been the 12 team in the ACC, but Boston College worked while the Orange were embittered by the first rejection and effectively lobbied to get the offer instead. As the Big East heads toward a possible breakup, there should be no surprise that members now are working against one another and quickly looking for a way out. When it comes to football, it was always like this.