Mustangs Bounce back with shutout

Share All sharing options for: Mustangs Bounce back with shutout 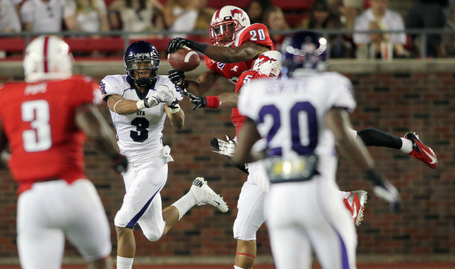 After starting the season with a surprising loss to Baylor, the Mustangs wanted to be able to bounce back with a win against the Stephen F. Austin Jacks. Especially with the Texas A&M game looming on the schedule, this was the Mustangs chance to gain some much needed momentum.

From the start of the game, it looked like Stephen F. Austin was upset minded and they took advantage of some early momentum that quieted the crowd at Ford Stadium. But gaining that early momentum wouldn’t prove beneficial for the Jacks as SMU showed early their defense was going to play a vital role in this game. But the special teams also wanted to jump in and become a key factor in this game as well.

With about six minutes to go in the first quarter Margus Hunt got a block on a field goal try, which would be an NCAA record 9th career block. While that block didn’t turn into points for the Mustangs, it did spark the crowd and start momentum shifting towards the SMU side.

It wasn’t until the second quarter that the Mustangs were finally able to get on the board. At this point of the game it was starting to become a turnover fest for the Jacks, when an interception turned into seven more points for the Mustangs. While a 14 point lead was nice, there was still a feeling in the stadium that the Jacks could start a comeback at any moment and tighten this game up. But one more field goal block before the half returned for a touchdown had the Mustangs comfortable with a 21 point lead.

14 more unanswered points in the 3rd quarter pretty much salted away the game for the Mustangs, but the story line wasn’t offensive power, it would become the turnovers forced by the defense and blocks in the special teams. The final score ended up 52-0 with the Mustangs forcing 8 turnovers, 6 interceptions and 2 fumble recoveries. It was a special night for the Mustangs defense and turned what would have been a close game into a rout.

June Jones commented in his post game press conference "We kept talking about takeaways, and it finally happened" and even though the score was fairly lopsided he felt "Stephen F. Austin had momentum the whole game" But he did admit to conservative play calling to give Gilbert a little more time to get comfortable in the Mustangs offense.

This was the first time the Mustangs had shut out an opponent at home since 1983 when they shut out the University of Texas at Arlington Mavericks. It was a historic night at Ford Stadium, but there were only 20,122 on hand to witness the history. Expect a full house next weekend when the Aggies invade Dallas.

This was a momentum building win, and it will take every bit of momentum the Mustangs can muster as they face the Texas A&M Aggies at home next weekend. A win next weekend would be an amazing feat for this Mustang team and it would shock the country.