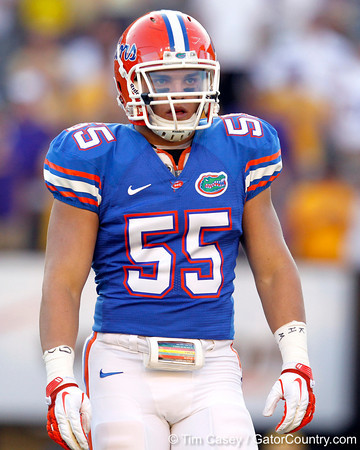 Former University of Florida linebacker Graham Stewart announced earlier this week that he was transferring from Florida in hopes of finding playing time and playing closer to home. According to Desmond Conner of the Hartford Courant, Stewart has found his home and will be transferring to UConn. Stewart is a Middletown, CT native that played football at Xavier High School. Heading back to Connecticut to play for the Huskies will have him comfortably back in his own backyard again.

Stewart said his decision is final, no one else is getting involved. He is scheduled to visit UConn, unofficially, next week to dot all the Is and cross all the Ts on this but there shouldn’t be any reason why the transfer won’t go through.

Stewart was a class of 2011 signee with Florida and will sit out the 2012 season due to NCAA transfer rules. Though, according to Conner, Stewart will apply for a hardship waiver and Florida coach Will Muschamp has written a letter to the NCAA urging Stewart be given the waiver that would allow him to play immediately.

Coming out of high school, Stewart was rated a four-star prospect and the 16th best inside linebacker by Rivals.com. He will have three years of eligibility remaining after he sits out his transfer season (assuming his waiver is not granted). As a true freshman, Stewart played in 12 games for the Gators and scored a touchdown in Florida's Gator Bowl win over Ohio State.

Andy Guyon, Stewart's defensive coordinator at Xavier High School told BECB that he had spoken briefly with his former player and said:

Having Graham come back and play closer to home is very exciting. I can't say how proud I am of what he accomplished at Florida. To have Graham and Sean [Marinan Jr.] up [in Storrs] is going to be fantastic. ... He had to do what he felt was best for him. Selfishly, I am happy.

Sean Marinan Jr. is the son of Xavier's head coach. He will be a preferred walk-on at UConn in the fall and yesterday was named All-Area High School Wrestling MVP by the New Haven Register after a 47-0 record.